Fascists can't tolerate anyone who has a different world view to them. They want their opponents no-platformed. In their crusade, they don't want anyone with whom they disagree to have a voice. If their political opponents get injured or worse, then so be it, because they are vermin.

What I have described above are also the tactics of the so-called anti-fascists, but they can't see the irony. And so last night a group calling themselves "London Antifa" stormed into a meeting of the Libertarian Society at King's College London. It was a successful raid for them as they managed to shut down the meeting. Job done. Fascism 1, Free Speech 0. 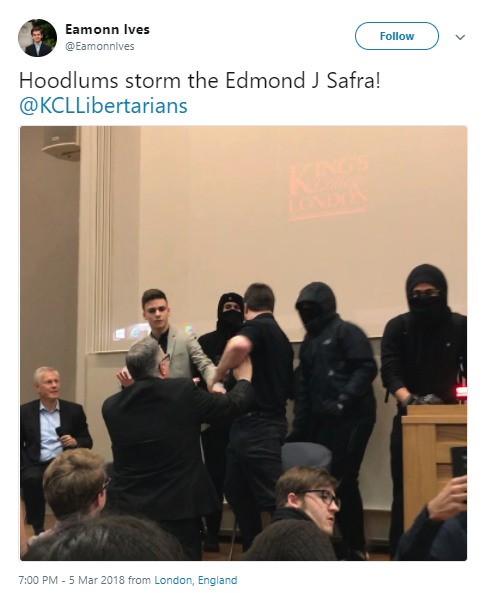 What the fascists were objecting to was the presence of Carl Benjamin, who I have to admit I had never heard of until this morning. He is described as "alt-right", a label he disagrees with. Even the Daily Telegraph describes him as "far-right". The newspaper should know better. They describe neo-Nazis as far-right, and Mr. Benjamin certainly doesn't fall into that category.

He is an anti-feminist. He opposes the progressive agenda of the left. There are times when he makes some extremely unpleasant remarks. But that's not the point. He is not breaking any laws. He has a right to be heard, and what happened last night at King's highlighted the nastiness of the fascist left.

According to the Telegraph, it is alleged that threatening notes were left at the scene by the thugs who stormed the meeting. One read: "The guy moderating the talk is on my course and he'll have a difficult time once the strike is over." A difficult time? What does that mean? Does he have to watch over his shoulder because he is at risk of being assaulted? It should certainly be investigated as a direct threat has been made against him.

I reported in late November last year that fascist thugs assaulted those wishing to attend a talk by Katie Hopkins at the Lewes Speakers Festival. They eventually managed to force open a door, but unfortunately for them, Hopkins had left the building. Another meeting cancelled because these fascists employed violent means to destroy free speech. The police weren't interested in arresting those responsible for the violence and criminal acts. It was only after I started making noises that the local media were remotely interested in properly reporting the incident. And it was only after those who had tickets for the event started complaining to the police, that the police eventually decided to open a proper investigation.

It therefore won't surprise you to hear that the Metropolitan Police are not going to make any arrests after last night's incident at King's. The message the police is sending out is that you can storm a building, assault those attending a meeting, cause criminal damage, leave threatening notes, succeed in breaking up a legal meeting, and nothing will happen to you. You won't get your collar felt by the Old Bill.

The police really need to get a grip on these type of incidents. They are becoming all too common. It is very worrying, especially as very few in authority appear interested in preventing the erosion of free speech. The rot has to stop.