The monarchy has survived far worse than Meghan and Harry

The following is a guest post by Tim Scott, Treasurer of The Freedom Association

In the film The Queen, Tony Blair (played by Michael Sheen) drives up to Buckingham Palace on his first day as PM. Cherie, known to be a republican, makes a few adverse comments. Blair counters with “It’s unimaginable, Britain as a republic”. Like its Netflix counterpart, The Crown, much of the dialogue is imagined (though both are reasonably historically accurate). But it shows the deep cultural and historical roots that the Monarchy has in Britain.

We’ve had a Monarchy for over 1000 years. It has survived all sorts: world wars, armed rebellions, riots, abdications, executions, murders and civil war. In my view it will survive, and indeed outlast Harry and Meghan.

After ‘that’ recent interview, republicans – always very much a minority following in Britain – have their tails up. Questions are now being asked. The damaging takeaway headline was ‘racist Royals’ and they do seem to be on the back foot. There are potential political implications too, as we shall see. The undeniable scandal of the Prince Andrew situation has added fuel to the fire.

Both Harry and Meghan have a certain star quality. She is articulate, confident, has strong opinions and is clearly ambitious. Why shouldn’t she be? What actor doesn’t want to bestride a bigger stage? You don’t get that star quality just by being Royal, athough it does help. You can see why they fell for each other, and it does seem to be a genuine love-match – as was Edward and Mrs Simpson. The huge crowds on the day of their wedding, and the massive TV audience, showed that we were more than happy to welcome Meghan and wish them well as a couple. For me, the fact that she was American and mixed-race was a plus. 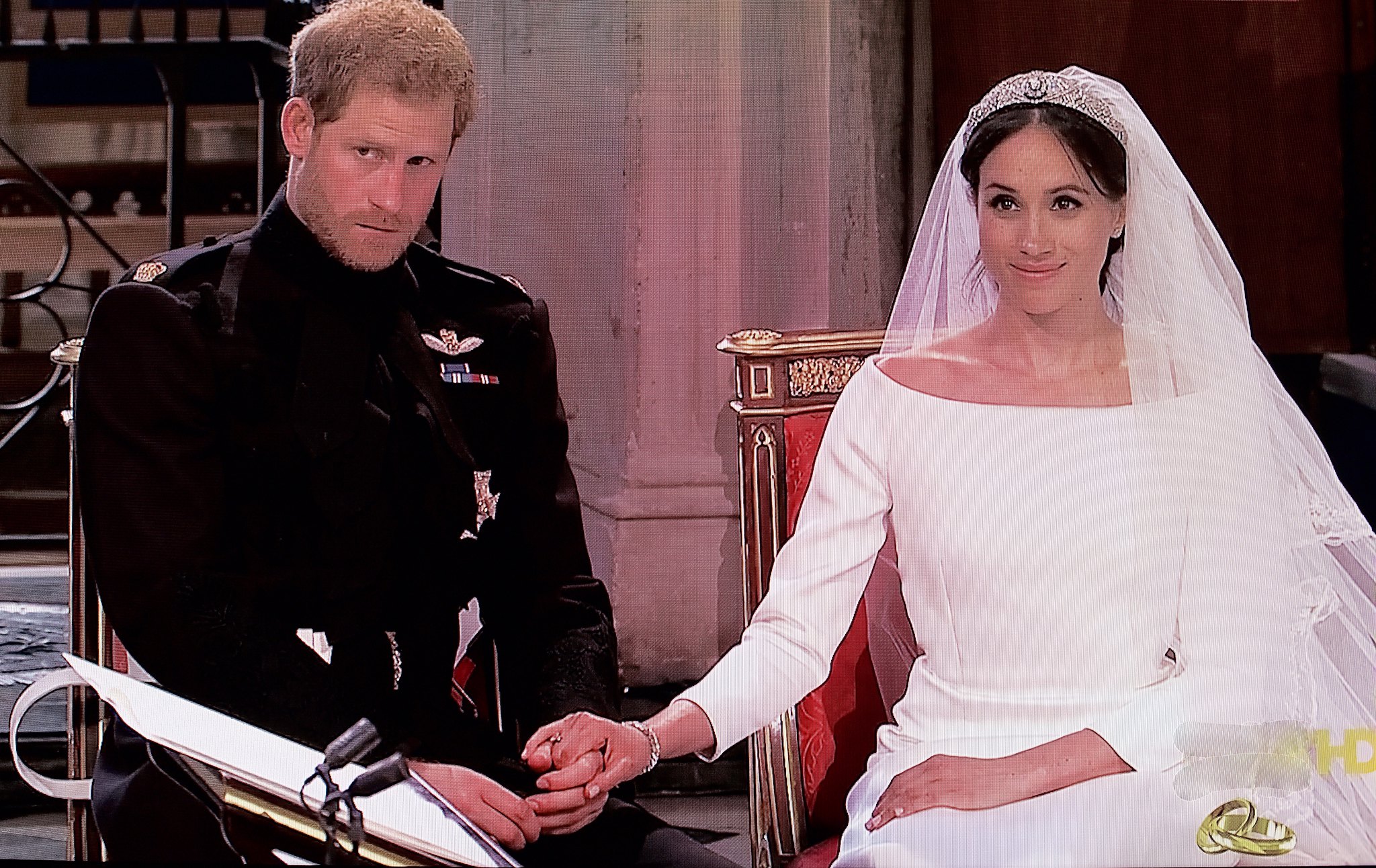 One genuine issue raised by their interview is how the Royals are not an easy family to marry into. They can never be a normal family, nor even a normal wealthy Hollywood-type celebrity family, which is what I suspect Meghan thought she was marrying into. It’s a working family – indeed they refer to themselves as ‘The Firm’.

There’s a lot of protocol, customs, and etiquette – even a dress code. No doubt some of it is outdated and due for reform. You have to do public duties and events, most of which are unglamorous and decided for you. Charles does (in a non-lockdown year) about 500 public events. This is actually quite hard work, not a swan as many probably imagine. You can’t just do and say what you want. There’s duty and service to the country and public involved.

It was frankly naïve of Meghan to say that she wasn’t allowed to say whatever she wanted in the Royal Family. But you do wonder if the Royals have learned the lessons from Diana. They are raised from birth into the job. Marrying into the family almost needs some kind of induction or boot camp first! Having said that, Kate is a real trouper and just gets on with the job.

Harry and Megahn undoubtedly did some good work for the Royal Family and Britain. Two well-received tours were done, one of Australia and New Zealand and the other of South Africa. These Royal tours are known to be demanding – they’re not a holiday.

However, quietly and dutifully ‘getting on with the job’ is now unfashionable and considered boring. Princess Anne for example has done hundreds of public engagements a year for decades, but hardly gets a mention. The Queen – the most famous woman in the world – is almost universally respected (even by many republicans) precisely because she has devoted her life to the job. She’s still working at 94!

Meghan’s claims of declining mental health should certainly not be dismissed. She probably did feel isolated and misunderstood, and hardly knew anyone here before meeting Harry. The relentless publicity and limelight would try the best of us. However, the many connections Harry has with mental health charities has been pointed out. And yes, some of the press coverage was unfair and at times a bit nasty.

The publicity and PR battle between Harry & Meghan and the Palace is a one-sided affair. The former can use all means at their disposal, and are not limited in what they can say. It’s a gunfight, but the Royals are barely allowed to shoot back. The Queen, quite rightly, will not want to be dragged into a running battle with tit-for-tat accusations. The Palace issued a dignified statement, pointing out that “recollections may vary”. But it received only a fraction of the publicity that the interview got, even in the UK, and one suspects very little abroad.

There does seem to be a ‘competition of the couples’ between William & Kate and Harry & Meghan. I suspect the latter see themselves as the real celebrities and worthy of a greater following. There’s also a clash of cultures. The duty-bound Royals versus the more laid-back Californians. A rival Royal House or perhaps even a ‘Prince over the water’.

The interview with Oprah was a soft one, with hardly any pushback. Sounding a bit like the Trump administration's “alternative facts”, she invited Meghan to tell “her truth”. This comes from a therapeutic and confessional culture where there is no universal or consensus-based truth, just ‘my truth’ and ‘my feelings’. If you ‘feel’ like a victim, then you are. Even if you live in a £10m Hollywood mansion.

The rather vague ‘nudge-nudge, wink-wink’ accusation of racism against the Royal Family was the most troubling.

We can’t be certain about what was said, by whom, what was meant by it or in what context. I can’t believe the story was made up completely from scratch (as some have claimed), but then ‘recollections may vary’. But, for the many around the world who won’t have the time or inclination to delve deeper into the issues, this provided the damaging takeaway headline, “The British Royals are racist”.

Make no mistake, this was a calculated and deliberate attack on the British Monarchy. Harry has gone along with it. He seems oblivious of the damage it will do to the Monarchy (from which both their reputations and wealth flow) and also to Britain in general. The interview has unleashed demons. On its front cover, the French satirical magazine Charlie Hebdo showed the Queen gleefully kneeling on Meghan’s neck. Doubt has been cast over the whole Royal Family, and the institution of the Monarchy, by making a vague and unspecified racism accusation and then refusing to name anyone. That accusation should now be clarified and the person named.

Their ratings in Britain have plummeted since the interview, and it's now (sadly) difficult to see a way back for a physical return to the UK. To be fair, it's worth noting that a few people really seem to have it in for them. A small minority of people did unfairly object to Meghan on racial grounds. On the plus side, international surveys have shown Britain to be one of the most welcoming and tolerant countries in the world. We are not a racist country, and neither do we have a racist press as Harry has tried to claim.

There could be potential political implications, especially if this row rumbles on and continues to damage the Monarchy:

We do have a bit of a peculiar relationship with the Monarchy, partly as a result of it being so embedded in our national life and story. I also think that as religious observance and belief in God have declined, people have looked elsewhere for something bigger than themselves to follow and believe in. The extent of the public grief over Diana's death took many by surprise. It certainly provides much opportunity for comment, gossip and intrigue – and not always for the right reasons!

Is the Monarchy in peril now? Somebody once said that it's more likely to perish from indifference than a revolution. It’s certainly safe until the Queen dies. But when she does (and the Crown will, of course, automatically pass to Charles) then after a respectable period of mourning, I expect voices to emerge questioning its future role.

It seems almost certain, for example, that Australia will become a republic.

We shouldn’t just keep a Monarchy because we’ve had one for years. Let’s value the continuity that the Monarchy brings. There are positive benefits. London is one of the most visited cities in the world, with the Royals a huge draw. A “here today, gone tomorrow politician” as Head of State wouldn’t be the same.

In summary, I feel it’s a pity the way things have turned out.  I am not one of the ‘good riddance’ brigade. They’re a loss to this country. They could have been such a star couple, boosting both the Monarchy and Britain. But the big question is: did they want to knuckle down and be pukka working Royals? I don’t think they did. Recent talk of Meghan wanting to launch an ambitious political career (even a run for US President?) gives us a bit more context.

‘That’ interview has harmed their reputation in Britain, and Britain’s reputation around the world. It was clearly aimed at an American audience, but the damage is sadly much wider.

In the end, I think Meghan wanted Up, and Harry wanted Out.