In memory of Her late Majesty Queen Elizabeth II

The Freedom Association publishes a magazine for members, The Free Nation, every month. This month, we have published an edition honouring our late Queen and have decided to publish it online so anyone who wants to read it, can. 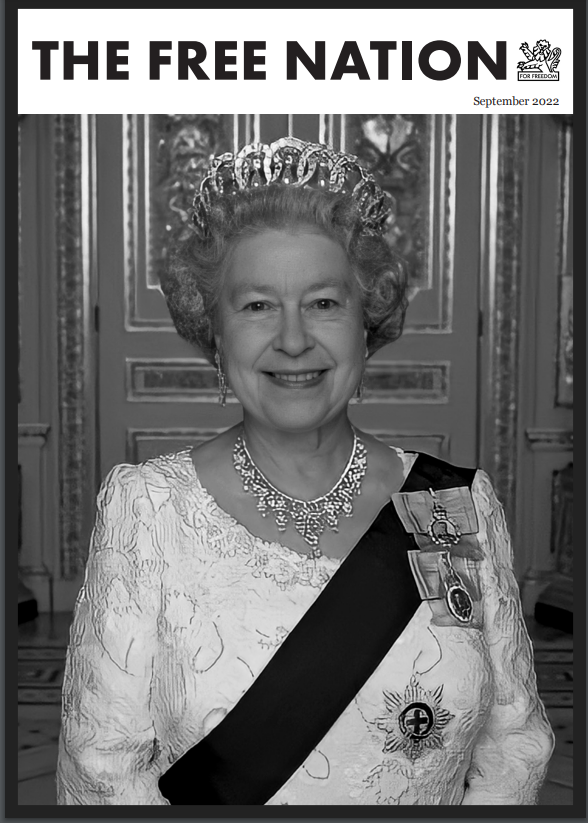 God save the King!

From the Chairman, Chief Executive, Officers and Council of The Freedom Association.

Our late Queen's life was a truly remarkable example of duty and public service: service to the United Kingdom; service to the British people, service to the Commonwealth family of nations, many of whom she was Head of State to in their own right, and service to the world as an example of dignity, strength and endurance. The person to whom Nelson Mandela went straight to once he had achieved his freedom; who charmed 13 US Presidents, many world leaders, and whose list of those who have not met her was much shorter than those she has.

She had a delightful smile, true humanity and a great sense of humour - willing to play a role with James Bond for the Olympics and alongside Paddington Bear drinking from her teapot. She was a sharp observer of character and was able to guide and comfort her 15 Prime Ministers, starting with Sir Winston Churchill and ending with the current Liz Truss. She met US bomber pilots back from live missions as a young Princess, and carried on serving right to the end.

As a grandmother devoted to family, she comforted Princes William and Harry after the death of their beloved mother, Diana, Princess of Wales. She guided the family through the difficulties and challenges all families face, and was wise enough to choose her “strength and stay” HRH Prince Philip, with whom she is once again united.

She also helped heal deep divisions during her historic visit to the Republic of Ireland in 2011, which was transformatory for the Peace Process; and was brave enough to shake the hand of former IRA Commander Martin McGuinness in 2012, despite the loss of her cousin, Lord Mountbatten, to an IRA bomb. McGuinness later toasted her at Buckingham Palace.

She was a world stateswoman and a deft diplomat, never putting a foot wrong. She was the longest reigning monarch in the history of our country - over 70 years - keeping the monarchy relevant and constant for us in a period of relentless change and transformation: from dreary post-war Britain to modern Britain today; from Empire to Commonwealth; and all sorts of social, economic and political change. She was a familiar rock in the midst of stormy, restless seas.

The Freedom Association expresses its deepest condolences to His Majesty King Charles III and his family. Her late Majesty was a remarkable Queen and will be sorely missed.

God Save the King!