There was no way unarmed police officers could prevent the violent mob from attacking them in Whitehall. Take a look at this video from The Sun. This took place yards from 10 Downing Street, yet it appears that there were no contingency plans in place to protect officers. Chants of “No justice, no peace - the racist police” should have alerted senior officers to the danger that something was about to kick off.

There was no doubt that the hard left used the demonstration as an excuse to promote their political agenda. One woman was filmed holding up a homemade placard which said, “Tories are Racists.” Chants outside the gates of Downing Street of “F**k Boris Johnson” and “Boris is a racist” made it clear that justice for George Floyd was the last thing on their minds. I would wager that some of those hurling abuse and engaged in violence against the Police were in the demonstration against the Government the day after last year’s general election. Do you remember that charming medical student who told a reporter that she wished Boris Johnson a horrible death? I bet he was pleased that she wasn’t treating him in St. Thomas’ Hospital!

Then there is Sadiq Khan, the Mayor of London. What does he have to say about the violence directed towards his police officers? Believe it or not, he has had more pressing issues to deal with. He has been busy promoting cycling. 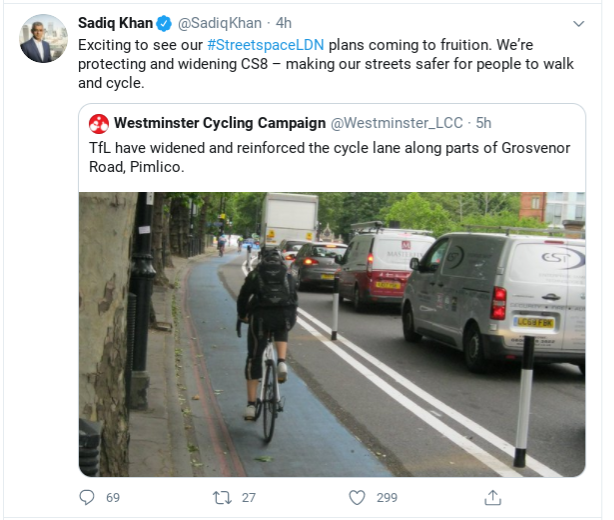 Despite what happened yesterday, there are more demonstrations planned in the U.K., including London. Protestors will once again congregate in Parliament Square on Saturday afternoon, and again outside the American Embassy on Sunday. People have a right to protest - I have organised a few in my time, but when you protest you must obey the law. Social distancing must be observed and violence against the police must not be tolerated. Khan should make that clear. The tweet below is simply not good enough. 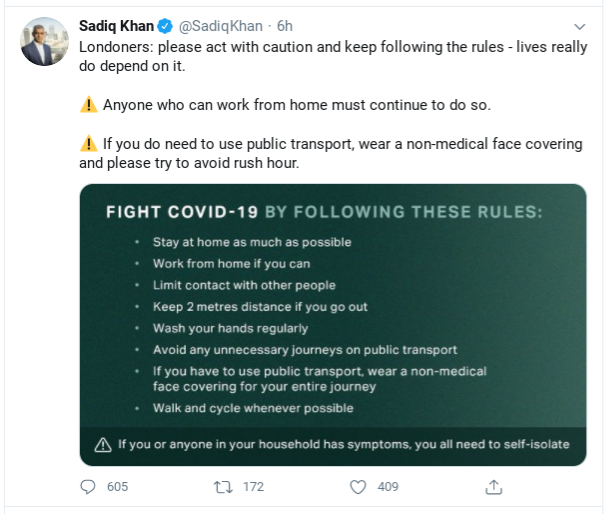 Many more people could die as a result of contracting COVID-19 which will have been spread around London yesterday. The police officers who were spat at and had angry people breathing on their faces will have taken an even greater risk with their own lives, and the lives of their families, by trying to enforce the rule of law.

If the law is broken once again on Saturday, further protests should be banned. Khan should make this clear, not virtue signal about cycle lanes. London is crying out for leadership. If Khan won’t provide that leadership, Boris Johnson will have to intervene to protect the police and to protect public health.