In an Electoral Commission report in January 2014, one of the recommendations was to introduce identity checks at polling stations.

"Polling station voting in Great Britain remains vulnerable to personation fraud because there are currently few checks available to prevent someone claiming to be an elector and voting in their name. This part of the system could become more vulnerable to fraud as other processes (including electoral registration and postal or proxy voting) become more secure. We have therefore concluded that there should be a requirement for electors across Great Britain to present an acceptable form of identification prior to voting at the polling station.

"We have found little evidence to suggest that the identity-checking scheme applied in Northern Ireland presents difficulties for people in terms of accessibility. At the same time, it provides a level of security that virtually eliminates the risk of personation. For these reasons, the system in Northern Ireland should provide the basis for a Great Britain-wide, geographically consistent and compulsory polling station voter identification scheme."

It is hardly an unreasonable recommendation. When I go to my local Royal Mail sorting office to pick-up a parcel, I am asked for ID. The vast majority of us have some form of identification. It works well in Northern Ireland where voters must apply for a voter identity card. No-one complains that that system disenfranchises voters. Voters in the rest of the UK who do not have any form of identification could be issued with voter identity cards to make sure they can still vote.

Yesterday I received this email from Cat Smith MP, Shadow Deputy Leader of the House of Commons. 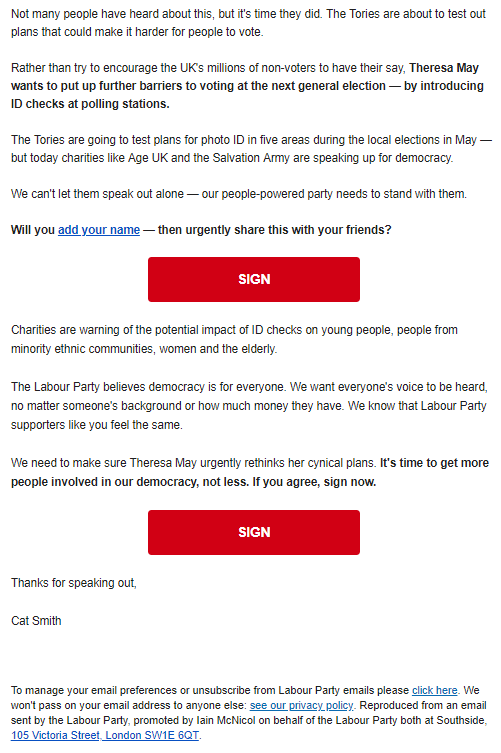 It doesn't surprise me that the Labour Party has jumped on this particular bandwagon. If they can whip up some hysteria about the issue they may get more people signing up for bulletins. They may get more members and donations. But to accuse the Prime Minister (and I am hardly a fan of hers) of "cynical plans" is just wrong.

To oppose a sensible suggestion that works very well in another part of the UK is saying that you are not interested in combating electoral fraud. You may as well publicly state that you are in favour of it.