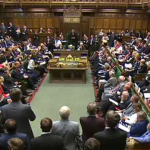 On the first day, the Prime Minister launched the Brexit process. On the second day, she left it to David Davis to explain the Great Repeal Bill. As the fictional Sir Humphrey Appleby once said in an episode of Yes Minister, “I explained that we are calling the White Paper Open Government because you always dispose of the difficult bit in the title. It does less harm there than on the statute books. It is the law of Inverse Relevance: the less you intend to do about something, the more you have to keep talking about it.”

That’s what the Great Repeal Bill is. It doesn’t repeal anything. It merely places existing EU laws on to our statute book. What we don’t know is how long it will take to rid ourselves of some of the Brussels excess – if indeed we shall ever be rid of it. Take the EU’s Tobacco Products’ Directive (TPD). You could be forgiven for thinking that the only products it is regulating are tobacco products. It is not a case of disposing of the difficult bit in the title, as it does apply to tobacco products, but in true Brussels fashion, it also manages to weave its tentacles into the e-cigarette market. For those of you who are not sure, the liquid that goes into most e-cigarettes does contain nicotine, but it does not contain tobacco. E-cigarettes are not a tobacco product. I can understand the average punter getting confused, but it really is unforgivable for those making EU laws to regulate something of which they know nothing about.

The Freedom Association’s ‘Freedom to Vape’ campaign will be pressurising ministers to make a commitment to ditch the meddlesome regulations that have been forced on the vaping industry in the TPD, such as the ban on advertising, the maximum size of tanks (the part of an e-cigarette that holds the liquid. The EU has restricted the size to just 2ml), the size of e-liquid bottles (they are now restricted to 10ml), and the strength of e-liquids (the EU even tells us how much nicotine we can put into e-liquid, a counterproductive regulation which may result in many people going back to smoking)

If we are going to take back control once we leave the EU, the Great Repeal Bill should do what it says on the tin. At the moment it is doing the opposite, which I am sure is pleasing all the ‘Sir Humphreys’ across Whitehall.