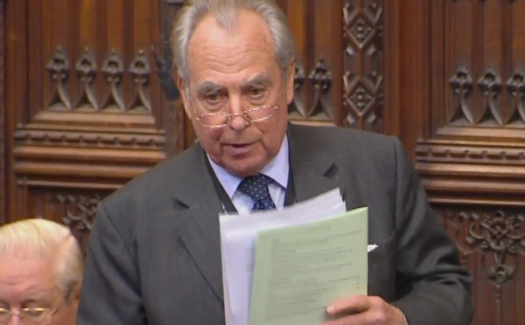 "My Lords, the Government have not made an assessment of the Civitas report The Brussels Broadcasting Corporation?, as the BBC is operationally and editorially independent of the Government. Under ​its royal charter, the BBC has a duty to deliver impartial and accurate news coverage and content. The BBC is also subject to the Ofcom Broadcasting Code, which requires that news is reported with due accuracy and presented with due impartiality. As the new external regulator of the BBC, Ofcom can also consider complaints relating to the BBC’s output."

In other words, he is not going to read the report and in no way is he going to criticise the BBC. Lord Tebbit asked the minister if he thought, as a private individual, that "there is something wrong when, out of 4,275 guests talking about the EU on BBC Radio 4’s “Today” programme between 2005 and 2015, only 132, or 3.2%, were supporters of the UK’s withdrawal from the EU".

More platitudes from the minister about impartiality, ministers keeping out of editorial decisions, etc.

Lord Hamilton of Epsom asked the minister if he can quote any instances where complaints to the BBC about political bias have been upheld. The minister does not know the details of any complaints.

All other Peers basically rose to the defence of the BBC.

A perfectly reasonable question from Lord Pearson was kicked into the long grass. The mainly Europhile House of Lords isn't interested in the Civitas report. It isn't bothered that only 3.2 per cent of guests talking about the EU on the Today programme between 2005 and 2015 were Brexit supporters. Business as usual for many in the Upper House.