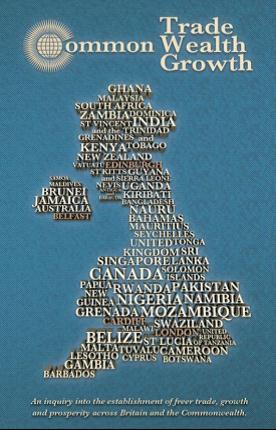 Commonwealth: a path for mutual prosperity. If you would like to buy a copy, as well as read a preview, please visit the Amazon page.

As the UK struggles for growth and our EU partners stagnate we should look to Anglophone nations that can help Great Britain prosper.

2012 saw the dramatic Diamond Jubilee celebrations and witnessed the warm sentiments that unite our Commonwealth partners. Our latest publication says we can now do so with trade.

Authored by Tim Hewish with James Styles and introduced by Andrew Rosindell MP, ‘Common-trade, Common-growth, Common-wealth’ comes at a vital moment as the global economy struggles to recover from recent crises and talk of a referendum on Britain’s membership of the EU moves up the political agenda. The book was launched at The Freedom Zone in Birmingham in October by Andrew Rosindell MP.

TFA and the authors wanted to understand why the Commonwealth was an under utilised trade club and then constructed of ways how we could counteract this trend and to establish a network of shopkeepers as well as an environment where policy makers come to see the Commonwealth as an outward looking internationalist organisation. We both want the Commonwealth brand to be spread far and wide.

If the UK were to leave the EU then it needs a ready-made structure that can immediately support its trade capacity. Eurosceptics of all parties need a positive story to tell. This is a big part of our Better Off Out vision.

By working to build up the Commonwealth into a first rate international trade centre the UK can sustain itself and grow in a post-EU world. This has to commence immediately otherwise the UK risks being left behind in the growth areas of the world.

The paper convincingly argues that the Commonwealth can act as a path to the growth markets of the world that will be so pivotal to the UK’s eventual economic recovery.

Tim Hewish – the lead author of the book – says,

“The Commonwealth is often wrongly attributed as a relic of empire. Instead, we present a positive, dynamic, and forward-looking vision of the Commonwealth based primarily on trade and commerce, not politics. Our overarching aim is to help other nations trade out of poverty by creating a set of recommendations that will foster growth and social cooperation. We envisage creating a Commonwealth platform that will be resilient enough to help the UK rebalance its trade and wean it off harmful European economic dependence.

“The long term goal of British economic and foreign policy should be to forge trade deals independently with growing economic partnerships such as the Commonwealth, NAFTA, EFTA and ASEAN, which are devoid of political union. We firmly believe that our paper lays the foundations of this huge project. All we need now is the political will.”

If you would like a copy, please contact Rory Broomfield or Tim Hewish. Please visit the book’s website for further information and join the Facebook group to show your support for Commonwealth trade. An electronic copy of the book is available here.

We believe that this Jubilee year is very much the year to renew our ties with the Commonwealth. We hope you can join us on the next step of this journey.