The journal of The Freedom Association 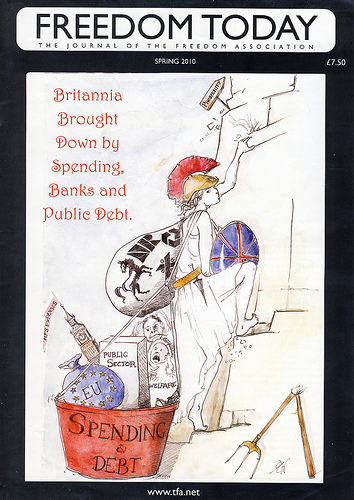 The Freedom Association’s quarterly journal,Freedom Today, is a 28-page, full colour publication, packed with interesting articles, news and comment about freedom and TFA’s campaigns and activities.

With no party line to toe – and contributors from a number of different mainstream political parties – Freedom Today has earned a reputation for fearlessly tackling issues other publications often ignore. For example, it led the way in questioning identity cards and consensus thinking on climate change and has helped change opinion on both. Political correctness and the UK’s membership of the EU are other areas in which it has consistently challenged left-liberal received opinion.

In addition to being mailed to all Freedom Association Members, Freedom Today is sent to many Peers, MPs, MEPs and opinion formers.  It offers attractive rates* for advertisers wishing to reach readers on the libertarian, Eurorealist, centre-right of British politics.

If you’re not currently receiving Freedom Today, why not find out what you’re missing? It’s easy to  join TFA online and membership is great value, with special rates for students. If you’d like to take a look at a copy first, simply contact us, providing your postal address (UK only), and we’ll send you a complimentary sample issue.  Remember, ‘No Freedom Today, no comment!’