What do you have to do to get arrested by Sussex Police?

In the middle of October I was invited to give an interview for BBC Sussex about Katie Hopkins. It's not the first interview I have given about her, and as I have discovered over the last two days, it wasn't my last. She is someone who brings out the worst in people, irrespective of whether you agree with her or not. She is deliberately provocative; she stirs up trouble when perhaps it would be wiser to keep one's counsel. But, no matter what we think about her, she has a right to free speech.

Hopkins had been invited to speak at Lewes Speakers Festival. After it had been announced that she would be speaking, cue the outrage. A social media campaign demanded that the invitation be withdrawn. I read comments like, "I'm all for free speech, but when in comes to Katie Hopkins..." During my interview last month, I advised those getting hot under the collar that they should use their right to free speech and publicly challenge her, rather than ban her. They could, if they had wanted to, bought tickets and filled the audience with potential hostile questioners. But no, they weren't going to do that. Instead, they went down the easy route of intimidation and mob rule.

I have spoken to someone who had a ticket to attend Katie Hopkins' talk. They have a ticket to prove it, however, after the intimidation they received, they wish to remain anonymous. Here is their account:

"I said, nicely, that I was fully aware of her rhetoric, but until she is prosecuted, its simple, nasty as some of her words are, she has the right to say them. I told them that I respected their right to protest, but that they must respect my right to hear what Katie Hopkins has to say.

"Her colleague, who happened to be Indian (this will become relevant) then asked why I was seeing her. I said that I wanted to hear her talk about her book, find out what its like to be her, and question her, if given the chance, on some of the stuff she has said and why. He then said, 'so you are for her hate speech then?' I again said, 'well that depends on your definition I suppose, but she hasn't been prosecu....' 'You're a racist', was his reply, very loudly.

'I was then surrounded by three people in hoodies with scarves covering their faces. They started barging me and calling me a 'f****** nonce' and a 'fascist'

"It was then that I knew this was not going to be anything other than a deliberate attempt to suppress free speech.

"I manged to get into the building, one of the last that could, as I thought it a better option that trying to leave through the crowd of protesters - for my own safety - as there was only one visible policeman there at that time and two very brave doormen.

"I can tell you that people were terrified inside that building and I only feel it was good fortune that the doormen, 2-3 police, and reluctant, but needed volunteers (attendees), managed to keep both doors shut. A couple of attendees were assaulted, including police.

"The lady on the clip [a protester interviewed by BBC Sussex who said the protest was mainly peaceful] is either lying or was not at the door because it was NOT peaceful. They deliberately stopped and shouted and spat at us".

The person who gave that account wanted to put on the record their appreciation for the police officers who were present. It wasn't their fault that the police were so under-resourced at the time.

I have written to Katy Bourne, Sussex's Police and Crime Commissioner, asking her to order an investigation into the policing of this event. It wasn't as if the police didn't know that there was going to be a protest. No doubt I will hear back from Ms. Bourne in due course, and if you click here you can listen to the interview I gave to BBC Sussex last night where I explain my concerns.

Earlier today, though, Sussex Police tweeted the following statement to me: 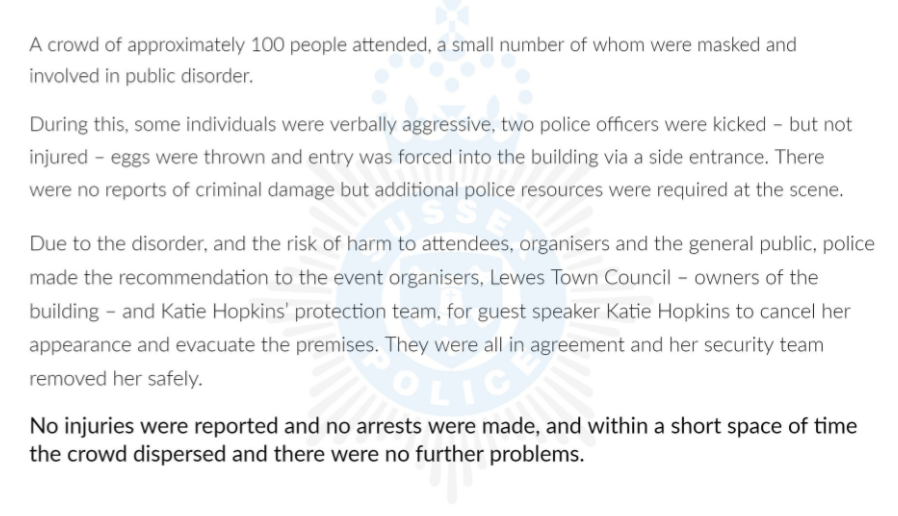 Here is my reply to them: 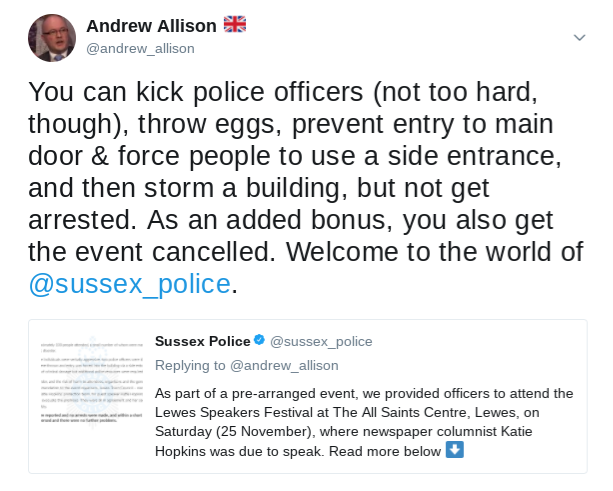 I therefore must ask the following question: what do you have to do to get arrested by Sussex Police?

The policing of this event was incompetent. The two or three police officers on the ground were left to control a baying mob of a hundred. Many crimes were committed. Senior officers have serious questions to answer, and as you can see by the account above, it was very fortunate that none of those attending were seriously injured. Heads should roll at Sussex Police, and I can only hope that Katy Bourne takes my letter of complaint seriously. If she doesn't and nothing is done, the clear message going out to anyone who wants to organise an intimidatory protest is that you are free to do so - without consequences.